While some car manufacturers have come to focus only on high-end, luxury vehicles, which can provide a higher margin as they are sold, there are also manufacturers that haven’t forgotten about people who don’t really have a huge budget available for such a purchase. After all, most people today look at cars as a way of getting from A to B, and nothing more.

So let’s have a look at some of the more affordable cars available on the market. The sole criteria we will be following will be the price, as we will try to manage with a budget of just $15,000, plus another $1,000 available just in case. After a quick analysis, it turns out that we’re looking at the following options: the Chevrolet Spark, the Hyundai Accent, the Kia Rio, the Mitsubishi Mirage, and the Nissan Versa.

The Honda Fit is just slightly out of range, as the starting MSRP for the Japanese hatchback is $16,190 (excluding destination charge of $995). That means we’re left with three sedans and two hatchbacks, although you could have a look at the Mirage G4 should you opt for the sedan version of the Mitsubishi instead. 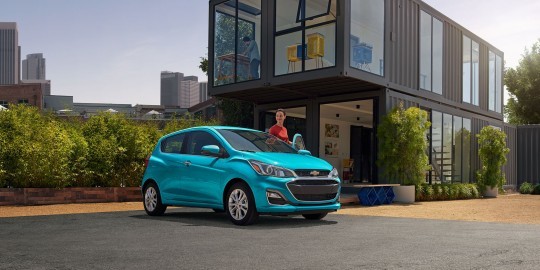 The Chevrolet Spark seems to be the most affordable option when it comes to brand new cars today, as the starting price is set at $13,400 (excluding $995 destination). Ever since the late ’90s, this vehicle has been a good choice for people operating on a tight budget. Trunk space is 11.1 cubic feet (314 liters), but it can be extended to 27.2 cubic feet (770 liters) with the second row of seats folded down.

Key figures include a fuel consumption of 30 mpg (7.8 liters per 100km) on city roads and 38 mpg (6.2 liters per 100km) on the highway. The engine is a 1.4-liter Ecotec with 4 cylinders, delivering 98 horsepower and 94 lb-ft (127 Nm) of torque to the front wheels. You also get 10 standard airbags. For the given budget, you’re looking at the LS trim, with either a 5-speed manual transmission or a CVT version, which is slightly more expensive.Mitsubishi Mirage
The second most affordable car around is the new 2021 Mitsubishi Mirage. Which, if you look at it, isn’t that far off from the Chevrolet Spark, at least when seen from the outside. Fuel consumption figures indicate 36 mpg (6.5 liters per 100 km) in city driving mode and 43 mpg (5.5 liters per 100 km) out on the highway, significantly better results than the Spark. 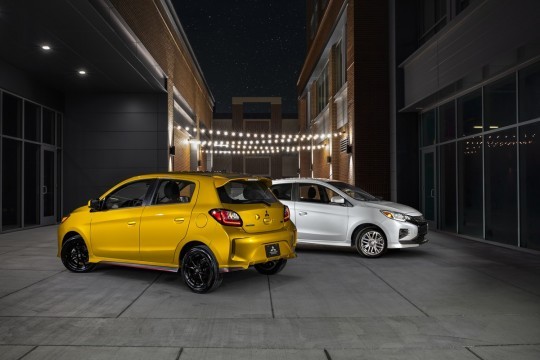 The ES trim fitted with a five-speed manual starts at $14,295 (excluding a destination charge of $995). There are only 8 colors to choose from, but we feel like the selection is good enough. There’s a 1.2-liter under the hood that outputs 78 horsepower and 74 lb-ft (100 Nm) of torque. Trunk volume adds up to 17.1 cubic feet (484 liters), which is also considerably bigger than what the Spark offers.Nissan Versa
The starting price for the Nissan Versa is $14,930 (excluding a $925 destination charge). There’s a 1.6-liter engine under the hood, which delivers 122 horsepower and 114 lb-ft (154 Nm) of torque, and it is mated to a 5-speed manual transmission in its standard form. Fuel economy ratings indicate 35 mpg (6.7 liters per 100 km) for highway driving and 27 mpg (8.7 liters per 100 km) in the city.

Cargo capacity is 14.7 cubic feet (416 liters), and the fuel tank can be filled up with 10.8 gallons (40.8 liters). There are only five colors available, but the list of accessories does seem to be a bit more interesting than that of the Spark, for example. Nissan also points out that the Versa has got 44.5 inches (113 cm) of front row legroom, which is more than what the Spark, Accent, and Rio have got to offer. 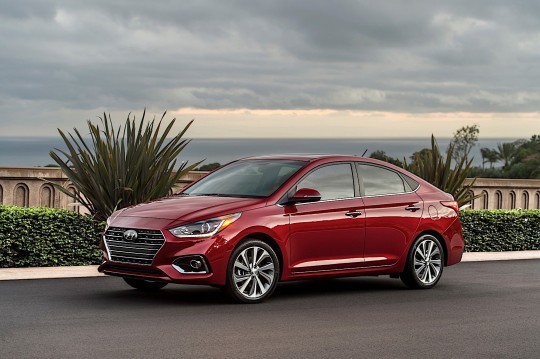 Fuel consumption figures show 29 mpg (8.1 liters per 100km) for city driving and 39 mpg (6 liters per 100km) for the highway. The Accent comes with a standard 6-speed manual transmission, and the carmaker claims a slightly better fuel economy with the Intelligent Variable Transmission; but at $1,100, that already has us going over the budget. Cargo volume is rated at 13.7 cubic feet (387 liters) with the rear seats up.Kia Rio
Last but not least, we’re looking at the Kia Rio, which is already very close to our maximum available budget, as it starts at $15,850 (excluding $995 destination). This one also uses a 1.6-liter engine with 120 horsepower and 112 lb-ft (151 Nm) of torque, which should be good enough for 33 mpg (7.1 liters per 100 km) around town and 41 mpg (5.7 liters per 100 km) on the highway. 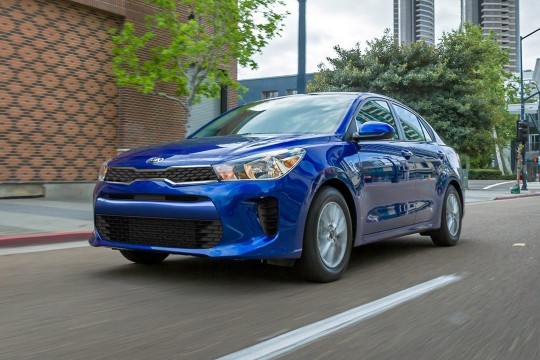 As opposed to the Hyundai, the Rio already comes with an automatic gearbox as standard. Cargo volume is identical to the Accent, at 13.7 cubic feet (387 liters). All in all, the Rio seems to be pretty much the same car like the Accent, with some minor differences here and there. It’s no wonder they’re often looked upon as “corporate twins”.Our take on the buying process
At the end of the day, it all comes down to your basic needs. Do you want the cheapest option on the market? Then the Spark is definitely the one for you. The Nissan Versa doesn’t sound bad either, as it has one of the more powerful engines in this selection, and it doesn’t look half bad either.

If driving stick shift isn’t an option for you, and you’d just like to go down to the dealership and jump in a car and drive away, then the Kia Rio might be your best choice given its standard automatic gearbox. Not that we’re big fans of that kind of gearbox, though. 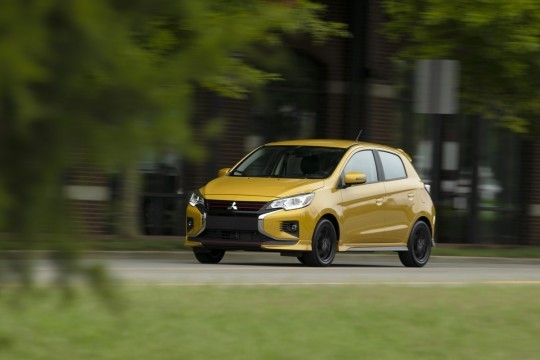 All in all, the Mitsubishi Mirage looks like the most interesting option out there, and you can have it either as a hatchback or as a sedan, according to your own preferences. The powertrain warranty of 10 years and 100,000 miles (160,000 km) also sounds good, but as always, we do recommend you go out and ask for a test drive before actually buying any one of these cars.